Created and directed by: David Espinosa

Production: El Local EC. / CAET, in collaboration with the Department of Culture of the Generalitat de Catalunya

Project grant from the artists in residence program of Bilbaoeszena.

My Great Work is what I would do if I had an unlimited budget, the largest theater in the world, 300 actors on stage, a military orchestra, a rock band, animals, cars and a helicopter. My Great Work is an utopia. The reality in which we have always moved as artists is characterized by precariousness and lack of means, and there has always been precisely the focus of our work: devise mechanisms to address the lack of resources, make a virtue of necessity, emphasizing gaps to enhance interest and failure as a creative engine.

In «Mi Gran Obra» we plan to build a large-scale show, sparing no expense, developing all the ideas that come up however expensive they could be, material and unlimited artistic team. But, obviously, with a slight draw back: a scale. That is, thinking big and doing small, using this approach and techniques of an architect. Continuing our questioning of the limits of theater and deepening the interest of previous projects on the idea of ​​performing, in this work we try to create a situation in which to question the meaning of major projects, artistic creations that handle high budgets and whose real cultural value is rarely demonstrable, colossal works very gimmicky and disingenuous, loaded with ornaments but their substance are questioned. While trying to carry out what we would do if we were really able to work under these conditions, which for us is a great format profitable. The result is a formal game with different non conventional narratives, a portrait of the society in which we live, containing metaphors that each viewer interprets in their own way. Images, actions and concrete scenes, that do not follow an argument and have not a discursive intention.

“It tries nothing less than to figure out how  much  the moral and physical condition of the human species can improve, while opposing a dam to wars, revolutions and riots. It is the holiest enterprise you can possibly imagine, for its aim is to achive benefits, not only for one single town, state or nation but for the whole of humanity, without the cost a drop of blood, nor a single tear.» (Manuel Sagrario de Veloy, 1841) 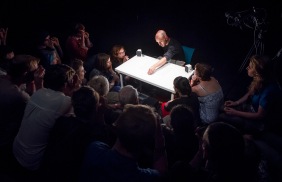